Coral reefs are under increasing attack by compounding forces including climate change, coastal development, and over-fishing. While the overall extent of coral reefs will likely not change in the coming decades, the composition of reefs is already changing and will continue to do so at a lightning pace. Changes in reef composition include the relative cover of live and dead corals, and macroalgae, as well as the relative amounts and types of coral species. While we know a fair bit, but not a lot, about reef extent, we know almost nothing about the changing composition of reefs.

While mapping coral reefs helps us to delineate where they are, what we currently lack is a method to monitor reef change at large geographic scales. Previous efforts to map reefs have covered only relatively short time frames, such as the duration of a major bleaching event, or they’ve covered only limited areas, such as a handful of atolls or a couple hundred islands. These studies tell us that reef-scale monitoring is feasible. However, none of these studies have produced a method that is generalizable across different reef types, owing to the combined issues of our atmosphere often being cloudy, a lack of satellite data streams to analyze, and constrained knowledge of water optical properties that literally hide the reef from satellite view.

My team at ASU is solving these problems by leading the development of the monitoring system for the Allen Coral Atlas. Our job is to develop a scalable method for ingesting millions of satellite images from the Planet Dove constellation, generating atmospheric and water column corrections, and detecting changes in reef color associated with large-scale compositional change events such as bleaching and storm damage. We are well on the way to developing this capability, with ever-improving methods for ingesting images from hundreds of different satellites, even as each behaves slightly differently. We have also nearly perfected an atmospheric and water column correction approach that is now mainstream in the Allen Coral Atlas processing pipeline.  The final step involves figuring out the best spectral-change metrics to take from the satellite data stream. We have built and tested three contenders so far, and we are working on new AI (artificial intelligence) based approaches that may radically improve our ability to detect subtle changes in the satellite spectral signals that indicate reef compositional change.

But sometimes we don’t need any of this to know a change is underway. We just need a frequent satellite view of the world’s reefs. And that is where another Allen Coral Atlas partner, Planet, truly shines. Take, for example, the Marshall Islands where I often work in the field (Image 1). 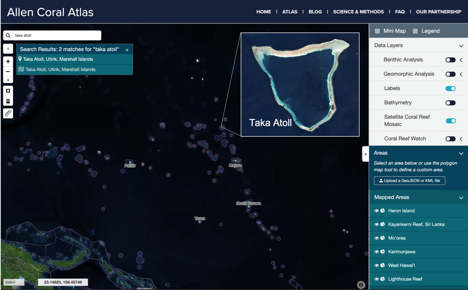 Earlier this year, a massive tanker grounded on Taka Atoll in the Marshalls. Satellites provided the first look at the situation almost overnight (Image 2). 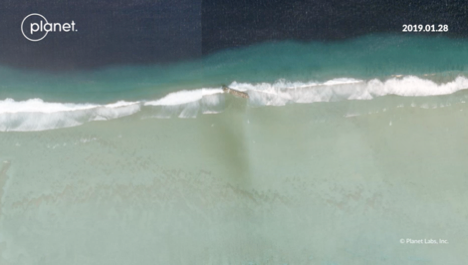 This led to the deployment of investigators aboard ship to get a close-up view of the situation (Image 3).

Image 3. Ship grounded on Taka Atoll in the Marshall Islands.

However, even while onsite, it was found that determining the extent of reef damage was going to be extremely difficult due to the size of the ship and the complexity of the reef. Even more worrying was the issue of fuel oil leaks. From experience, I know that determining the extent of a spill, let alone its impact on marine ecosystems, is an insurmountable task when done in the field alone. We need the bird’s eye view to guide us in the water.

In the Taka Atoll disaster, Planet’s Dove and SkySat data streams were ready, providing us with frequently updated views of leaking fuel oil.

The dark area south of the shipwreck has been confirmed as leaking fuel oil on the sea surface above the reef. This monitoring capability is scientifically novel and game-changing for environmental conservation and management efforts.

Stay tuned for much more progress in the coming year and beyond.